Kyūdō for the physically disabled 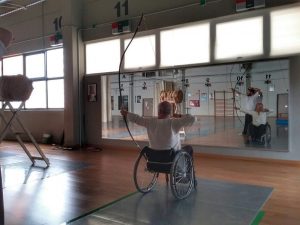 In 1988, I had a motorcycle accident in which I suffered a complete spinal cord injury at the D12 level. The bad news was that I would need a wheelchair for life. The good ones that I had survived and preserved the functionality of my arms and trunk. From the first moment I was aware that I had an important challenge ahead, learning to perform the most basic daily activities again; but the prize was even more important: to recover my personal autonomy. My DO (path) had begun!

When I left the hospital I decided to resume my sports activity. I went back to practicing yoga and swimming; and start to explore other sports such as Olympic shooting with a compressed air pistol, scuba-diving, sea-kayaking or para-equestrian horseback riding. I finally got started as an instinctive recurve archer. During an archery practice, a colleague told me about kyudo, I searched the internet and contacted the person in charge of the Spanish Association of Kyudo (AEK), who gave me the telephone number of the person in charge of the Dojo in Valencia. It was February 2017.

When I went to the Dojo in Valencia, my future teacher told me that the fact that I moved in a wheelchair would not be a problem; that he already had news of a kyudoka in the Nara Dojo (to which the AEK belongs) who practiced from a wheelchair; that Kyudo was an inclusive discipline, which was available for everyone, to the extent of their possibilities; and that if I wanted to practice, the Dojo would be happy to receive me. So it was. My DO (path) had taken the right direction! 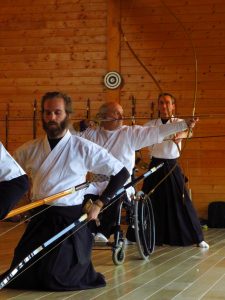 I joined the practices with the other initiates. At first with rubber bands in front of a mirror, practicing the basic movements of the Hassetsu. When the practices began with yumi and ya, the first adaptation needs arrived. After several tests, we decided that in Dozukuri I would rest the bow on the footrest of my chair; To prevent the yumi rope from pressing on the handrim of my chair in Kay, we placed the axle of the rear wheels as far back as possible, and the seat as high as possible; to be able to carry the arrows while I was moving, we added a piece of bamboo that served as a quiver; The yumi, in those initial time, was carrying by supporting it between my legs and holding the rope with my left armpit. And so the day came when I went to the makiwara to take my first shot. My teacher immediately saw the problem that from my sitting position it was impossible to shoot with the arrow parallel to the ground, so he placed the makiwara on a table with some boards on it so that it was the same height as my arrow parallel to the ground in Kay. I spent more than a year in the discipline of shooting makiwara before moving to shooting mato. I was aware that my evolution as a kyudoka was being slow, but also that my problem was not due to shooting from my chair but to the different opening between traditional archery and kyudo, so I abandoned my recurve bow for years.

When I finally managed to get Hassetsu’s moves even minimally right, I started shooting mato. And a few months later I was introduced to the journey of the sharei. This opened up for me a new perspective of what Kyudo is. Until then I had considered it as an individual discipline, but when I practiced sharei I realized my mistake. Coordination with other kyudokas is extremely important. In order to coordinate my movements with those made by the kyudoka who kneel or remain standing, we take as a model that of those who remain standing. And to carry my bow in the most similar position to the others, I have introduced the latest adaptation to my chair: a support on which to rest the bow so that it remains fixed, in the correct position, when moving.

During the last months I have been making adjustments to my movements to coordinate in the best possible way with the other members of the tachi. Last September I took my shodan exam and passed. The first part of my DO (path) as a kyudoka has been completed!

Information according to § 18 para. 2 Medienstaatsvertrag

Responsibility for links:
Our offer contains links to external websites of third parties, on whose contents we have no influence. Therefore we cannot assume any liability for these external contents. The respective provider or operator of the sites is always responsible for the contents of the linked sites. The linked pages were checked for possible legal violations at the time of linking. Illegal contents were not identified at the time of linking. However, a permanent control of the contents of the linked pages is not reasonable without concrete evidence of a violation of the law. If we become aware of any infringements, we will remove such links immediately.

Liability for content:
The contents of our pages were created with the greatest care. However, we cannot assume any liability for the correctness, completeness and topicality of the contents. As a service provider, we are responsible for our own content on these pages in accordance with § 7 para. 1 TMG (German Telemedia Act) and general laws. According to § 8 to 10 TMG we are not obliged to monitor transmitted or stored information from third parties or to investigate circumstances that indicate illegal activity. Obligations to remove or block the use of information according to general laws remain unaffected. However, liability in this respect is only possible from the time of knowledge of a concrete infringement. If we become aware of any such violations, we will remove the content in question immediately.

Copyright
The contents and works on these pages created by the site operators are subject to German copyright law. The duplication, editing, distribution and any kind of utilization outside the limits of copyright law require the written consent of the respective author or creator. Downloads and copies of these pages are only permitted for private, non-commercial use. Insofar as the content on this site was not created by the operator, the copyrights of third parties are observed. In particular, third-party content is identified as such. Should you nevertheless become aware of a copyright infringement, please inform us accordingly. If we become aware of any infringements, we will remove such contents immediately.